Two months before its release, we present the audience favorite of the last festival as an exclusive preview in the most beautiful open-air cinema in Regensburg, the wonderful Cinema Paradiso. Under trees, by the river and with headphones. Everything is set to make a big splash on the big screen!

Many may still remember our wonderful crowd pleaser from last year's festival. Be it actively in the cinema or due to a wrong decision they had because of the strange seeming premise and crappy title. Well, the latter can now correct their mistake and watch HOLY SHIT! (which will hit theaters here as ACH DU SCHEISSE! in October) on the big screen and check if the numerous selections at the biggest genre festivals in the world as well as the excellent press are really justified. Spoiler: they are.

A cross-check is possible on Saturday, 20.8.2022 at 9 pm at Cinema Paradiso in Regensburg, probably the most beautiful open-air cinema under the Upper Palatinate stars.

Update: Weather sucks! Therefore we move the shit to the cinemas in the Andreasstadel. You can buy tickets via the button below! Cheers!

This is what it's all about... 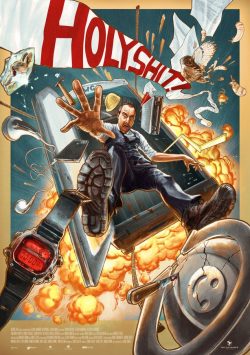 When you wake up and everything is blue, it's either the fault of the drunk or a porta-potty. It really sucks when this stinking plastic hell lies tilted to one side in a building site and you are impaled on a metal pole. Frank can tell you a thing or two about that! When the architect finds himself like this and then the mayor's speech at the nearby festival announces that the place will soon be blown up, the shit really hits the fan. For Frank it's clear: he has to get out of this shit!

Imagine a literally "shitty" variation on the 127 HOURS motif. Imagine that the shittiness of things has nothing to do with the quality of the film, and also imagine that all this shit is accompanied with very accomplished acting, absurd comedy, disgusting effects and perhaps the bloodiest "hot wire" game you've ever seen in the cinema. This film wipes its ass with relish with the prevailing prudishness and Bavarian felt! Party on!

This article was written by