What happened at the 8th HARD:LINE Film Festival

It's kind of strange when you sit down to type these lines, as you do every year. The same procedure every year and nothing has really changed. The laptop blows and the black letters fly onto the digital page. And yet, in consciousness, everything is different. Because Corona did not pass us by without a trace - just like it did everyone else. In February we started with the preparations for the 8th HARD:LINE Film Festival. Everything was still quiet and far away, but somehow we knew that something was coming up. Soon after, we were in shock and had to make decisions without any certainties. What can we afford, what can't we? How long will cinemas stay closed? What happens if we prepare everything, invest thousands of euros and then in the end can't take place? Questions upon questions.

Step one was therefore to pick up the phone and call all our partners: "Are you still on board"? Our main sponsor, the old Penninger distillery in the person of Stefan Penninger, and our premium sponsor Christian Volkmer from Projekt 29 tapped us on the shoulder and gave us their "go". In the middle of the crisis. Nonchalantly, honestly and without batting an eyelid. Would it be possible to carry out HARD:LINE 2020 after all? The funding agencies have also signalled their support. On one condition: we have to take place, no matter what. This raised the central question: How the hell are we supposed to guarantee that it will take place 100% of the time? Online - Yes, others have done that before us. But we couldn't imagine acting completely as a streaming platform. So we thought about it, explored it and thought about it. That's how the first - and certainly only - HARD:LINE Film Festival in hybrid form came about. Half in the cinema, half on the net. The films were to be smaller, because it quickly became clear that streaming could be a problem for rights holders.

With the most secure online festival platform in the world behind us and a seemingly not so bad reputation that we have built up, the programme just ended up being fat. This year's festival is special in many ways, but basically the same as before. We have the task of presenting extreme cinema in all its facets. We are fulfilling this task again this year. Holy shit! And how we do it. The films that we are allowed to show you are planks that first have to be drilled. 12 feature films, a secret cinema screening, 16 short films, a DJ night and a concert. These are the bare figures. 24 of the 29 films shown from all over the world will celebrate at least their German premiere in Regensburg. A quota we have never had before - and in a year in which we voluntarily renounced premiere status. Because it should be good films, so that we can have a nice film festival despite this asshole of a virus. Oh yes! We will certainly have that in both senses of the word. Whether it's at the cinema or at home. That's the middle finger this virus needs. Because we're doing our thing together with you all - and without a virus. Because we didn't invite Corona to our party! But you are invited!

The films of the 8th HARD:LINE Film Festival

For the Sake of Vicious

Good Guy with a Gun

Luz: The Flower of Evil

The award winners of the 8th HARD:LINE Film Festival 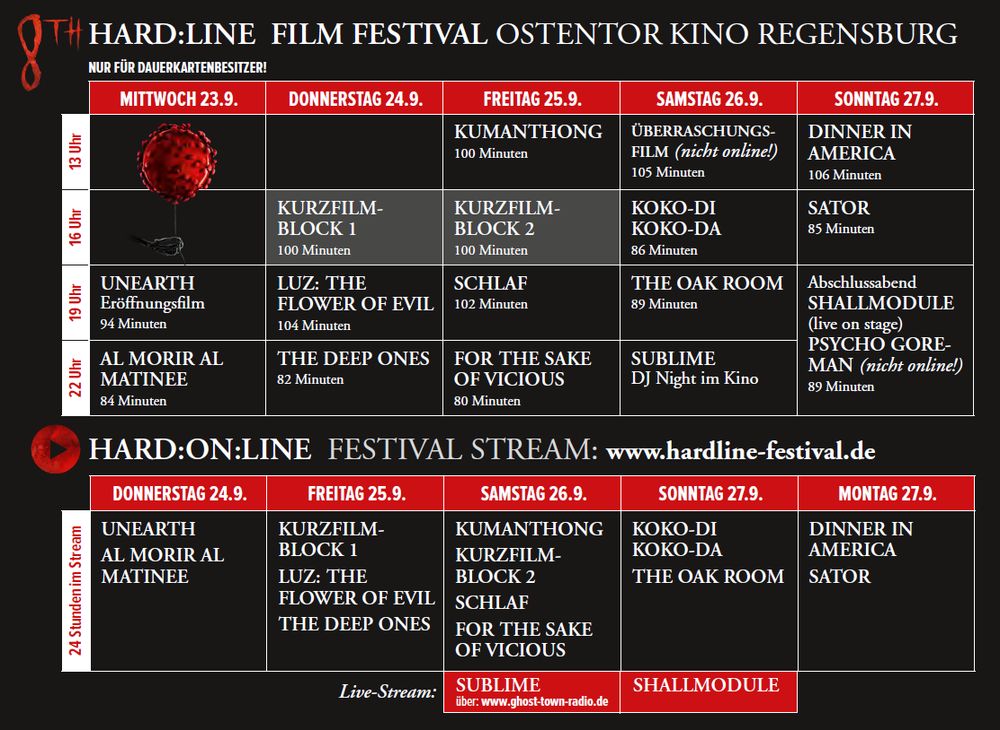 This year everything was different and special. There were no public parties for a well-known reason. But besides our beloved closing night, we won't miss the fantastic DJ set by SUBLIME! Saturday is booked and because we are not allowed to move to the cinema pub due to the distance rules and the Corona regulations, the girls and boys simply play the cinema itself. The invited circle remains the same: 50 season ticket holders and that's it. Unfortunately, external people are not allowed.

But what was there to hear? Anyone who doesn't know the Local Heroes knows far too little about life and the world anyway to have said that. But for all those who don't know Regensburg, the self-description of the DJ team is simply worth reading. Because you can't put it any more aptly than that:

"An understanding of music streams outside the mainstream and a sense for the extraordinary has brought together a few people who have established an indie event series in Regensburg: Their name SUBLIME."

With this in mind: Party on!

But hey, we wouldn't be us if we weren't us... or something like that. In any case, we want to share our party with you at home. Maybe you've been watching films all day, ordered pizza and finished your third bottle of wine, and now you want to have a little party in your inner circle. And you know what? We can do that.
GHOST TOWN RADIO, an online radio station that has set itself the goal of delivering something special for this city, has recently been launched in Regensburg. No one-size-fits-all. No retort. Passion is at play here! And you can easily listen in and enjoy the SUBLIME party as a live stream in your living room. No matter where you are accessing it from.

What should a final evening with band and film in the Corona year look like, please? Admittedly, it's hard to imagine. But our strict limitation to 50 people in the cinema, the same 50 every time, allows us to organise a concert and also to present a fantastic closing film after the awards ceremony.

First of all, SHALLMODULE had made an appearance. A band we had been in contact with for a year and were more than looking forward to. It all started as a jam session in the rehearsal room. The three musicians developed their own ideas from this into unconventional, powerful compositions that underline their shared love of psychedelic, stoner rock and prog. Frank on guitar and Hammond, Marcus on bass and Pablo on drums and electronics celebrate their music sometimes proggy playful, then again tons heavy. With their instrumental, epic music, SHALLMODULE give the listener space to let go completely and immerse themselves in the "Shallmodule". Extensive jam parts alternate with complex song structures. They spin stories from true or fantastic events. Who knows for sure? The performance is rounded off by visual stimuli on the screen, presented by the band themselves and the legendary VJ Ralf Oberleitner. The result is a fabulous, monumental evening that will also be heard online, at least in parts.